Circle of the Stars Druid

Harold is a human Druid from the city of Firamustus. He grew up as the youngest son of a family of nobles, the Wentworths. Harold had little interest in high society however, and grew up reading books about great adventurers and the mysteries of magic. He idolises his uncle Faustus who himself is an adventurer who specialises in retrieving rare artifacts with his crew the Delvers. On one expedition Faustus came upon a constellation orb which he gifted to Harold which became his druidic focus.

He currently attends Firamustus University where he is undertaking a PhD studying astronomy. Harold had previously studied the druidic zoology at the same university. Harold's supervisor is Professor Zinlaz Kegstone, a professor of Astronomy. Harold's thesis is surrounding the mystery of the wandering stars which unlike the rest of the night sky do not appear on Harold's constellation orb.

Through happenstance Harold became acquainted with Meredith and Potentia during the orientation week scavenger hunt. After some misadventure the trio became friends and later became involved in the rescue of Bonan, Nora and Michael after they were held hostage in the library. 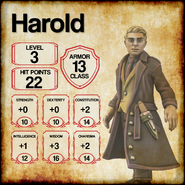 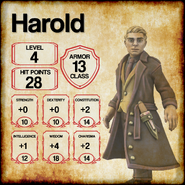 For the Dungeons and Doctorates campaign the characters started at level 3. Harold's stats were generated using points buy. As a variant human he also started with a feat, Observant. Harold is a druid with subclass Circle of the Stars.

Ross rolled a 4 on his d8 hit die gaining another 6 hit points with the +2 CON modifier. Level 4 is an attribute upgrade or feat level. Ross opted to give Harold a +2 boost to Wisdom rather than splitting or getting another feat. This increased Harold's Wisdom to 18 giving a +4 bonus to Wisdom rolls. This also increased the number of uses of Harolds star circle feature of Guiding Bolt / Augury to 4 uses a day. As a global druid feature, Harold also gained the ability to wildshape into a creature of CR 1/2 or lower as well as gaining the ability to wildshape into creatures that have a walking speed and/or a swimming speed.

Community content is available under CC-BY-SA unless otherwise noted.
Advertisement