We're Getting Mutants in the MCU - The Loop

The Common Room is the behind-the-scenes podcast series for Dungeons & Doctorates. Hosted by Ross Balch and featuring the main cast, the episodes include Q&A from the audience, as collected via a Google Form.

The first episode of The Common Room came out October 5th, 2020. The show does not have a fixed interval release due to the fact each story arc serial varies in the number of episodes. Instead the show releases after every 2 - 3 story arcs are completed. 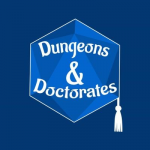